“Service is the rent we pay for the privilege of living in this world.”

“I want to devote my life to the service of anyone who needs it.”

“I enjoy every experience in my life.”

“My world is built on principles.” 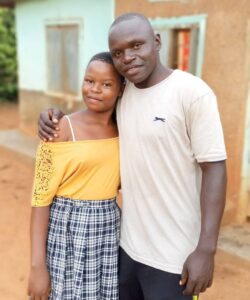 Powerful words.  They’re from a remarkable young man called Herbert who I first met on the CRMI Medical Mission in 2015.  He acted as my interpreter that year and has done so each year since.  Despite my best efforts over many visits to Uganda, I haven’t been able to master more than a few basic words of Luganda, the local dialect, so I rely on him a great deal.

I was immediately struck by his compassion and ability to get on well with everyone.  He was extremely calm, even when people were agitated, always the same and had the rare gift of finding the right words for the right occasion (as I couldn’t understand what he was saying in Luganda I can only guess he was doing that as he always seemed to leave people in a better place than when he met them).

Over the past few years Herbert and I have got to know each other well and we have, I think, grown to really appreciate each other.  Our backgrounds couldn’t be more different but we have discovered that we have a lot more in common than I could have guessed when we first met.  He says he learns a lot from me, but I frequently remind him that I learn a great deal more from him.

Herbert is now 27, an age at which many of his peers are either married or have fathered children, and sometimes a large number.  Not so Herbert – he has chosen to stay single until he is in a position to support a wife and family.

Herbert is devoted to his family.  His father died on December 26th, 2014, of unknown causes at the age of 52 and Herbert misses him a lot.

His first memories are of a huge party when his father married his seventh wife, and his first day at school when he was aged 6.  He had no school uniform or shoes to start with and wore his first pair of shoes at the age of 15 by which time his feet were full of cracks and blisters.

He first went to church at Bombo on  29th March, 2013, the last Friday in March (it’s very typical of him to be so precise).  He went with friends, and in his words “followed the crowd”.  He liked John Bunjo (founder of CRMI) at first sight and since then is the only one of that original group of friends to be still attending the church.  John has nurtured him, encouraged him and given him increasing amounts of responsibility.  Herbert now regularly translates at church from English into Luganda, or from Luganda into English.  This is a rare skill and he does it beautifully.

John has identified Herbert, and others in the church, to be the future leaders in their community and Herbert is happy to accept the responsibility of being a role model and make himself available to help others.  He serves as the Chairman of the church’s youth work. 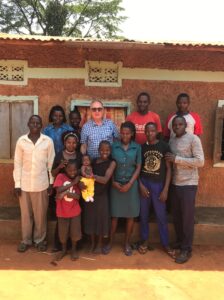 In 2019 I was lucky enough to be able to visit Herbert’s mum and family in their home.  They live about 1.5 miles away from the church and school on the far side of the village at Bombo.  It was the first time I’d travelled on a boda boda (motorcycle taxi) and the driver respected my wish to go slowly and avoid the worst of the holes in the road.  White people are not often seen in this part of the village so I attracted some attention.

When we arrived at the house I was warmly welcomed by Herbert’s mum and family.  There is a distinct and striking family likeness to all of them which makes it easy to recognise them all as siblings.  It was good to see their house and their surroundings.  Herbert is very close to his mother and she is obviously, and understandably, proud of him.

Herbert reads widely and is extremely interested in world affairs – we had an interesting chat about Brexit one day!  While he was studying he spent his time travelling to college reading books.  Each year I have taken some books for him (on psychology, emotional intelligence and personal effectiveness amongst other things) which he has devoured and enjoyed.  Bear in mind that English is not his first language and that I myself have struggled with the concepts in some of the books and you get some idea of his intellect.

In February 2020 he graduated with a Diploma in Electrical Engineering and hopes to go and earn a degree in the same subject.  I have no doubt that he will.

I’ve yet to meet anyone who doesn’t like Herbert.  I’m proud to know him and to call him my friend and to have played some small part in helping him to become the fine man he is today. 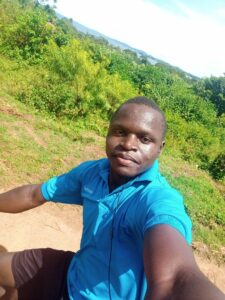 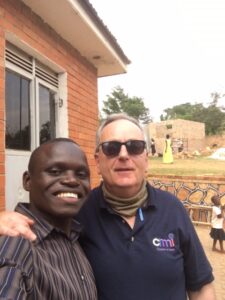