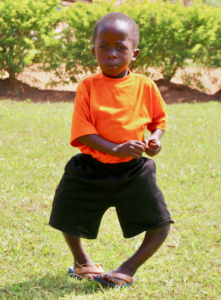 We first met Marvin in 2017.  Adam and George were playing football with the children in Ssanga whilst we were running a clinic in the church.  Marvin ran out of his grandma’s house to join in.  He was wearing flip-flops on his feet both of which were turned inwards, so it was amazing that he was able to run at all.  Adam immediately called for his guardian, Grandma Justine, who was found and we took Marvin into the clinic to be seen by Dr Mike.

Although Marvin was around 5 years old when we met him, he was very small and his knees were bent outwards whilst his feet turned in, which made him seem even shorter.  Justine told us that his mother had died (we later found that she was HIV+ve but thankfully Marvin is -ve) just after Marvin was born, and so he had not been breast fed.  Only the wealthy, and those who own cows or goats, are able to have dairy produce in Uganda.

What we were seeing here was a probable case of rickets in a little boy who had been malnourished from birth.  Rickets is a skeletal disorder that’s caused by a lack of vitamin D, calcium, or phosphate.  These nutrients are important for the development of strong, healthy bones.  People with rickets may have weak and soft bones, stunted growth, and, in sever cases, skeletal deformities.

Vitamin D helps your body absorb calcium and phosphate from your intestines.  You can get vitamin D from various food products, including milk, eggs, and fish.  Your body also produces the vitamin when you’re exposed to sunlight. 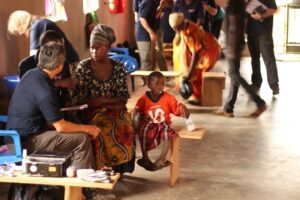 Rickets is most common in children who are between 6 and 36 months old.  Children are at the highest risk of rickets because they are still growing.  Children might not get enough vitamin D if they live in a region with little sunlight, such as the UK or have a poor diet such as Marvin in Uganda.

As we began to talk with him, we realised that Marvin is a charming little boy with great determination.  He has obviously been well looked after by his Grandma, who is a remarkable woman because she has continued to nurture Marvin despite his disability.  As we have said before, disability in Uganda is looked upon as a curse or something to be ashamed of and hidden.  Where there is very little food, the disabled are often the last to be fed and can be forgotten and excluded, as they are unlikely to be able to earn money.  Marvin has obviously been brought up with a knowledge that he is loved because he exudes confidence and has a ready smile and chuckle.

The doctors gave Marvin vitamin D and full cream milk to help his growing bones become strong.  They discussed what steps would be needed to help straighten his legs. 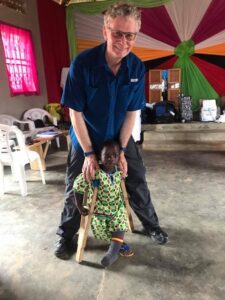 Marvin has been sponsored and attends school.  We also arranged for him to go to Rising Above Disability in Katalemwa.  This group does great work with disabled folk of all ages and abilities and they are able to assess ability and give recommendations for further treatment.

Through Rising Above Disability, Marvin was referred to a special Orthopaedic hospital called Corsu and in 2018, they performed 2 surgical procedures upon his left leg to straighten it.  CRMI paid the bill, and we visited Corsu to see how things are done there.

Corsu is a place that shows a very positive attitude towards patients and has a peaceful atmosphere.  We were happy with the care that we saw and the way that the hospital is run.  Marvin is under review for further procedures and we will support him and help him to continue his visits to Rising Above Disability.

It is an education every time we visit Uganda! After his first operation, when Marvin’s left leg was in plaster, we had the joy of watching the charmer in action.  All he had to do was sit, and little girls were running around asking if there was anything he needed, bringing him water, etc.  The Marvin smile would be worth a fortune if it could be bottled and sold.  We can see that this young man will get by in life in spite of the difficulties he has had to face.

We hope and pray that we will be able to support and nurture Marvin into maturity and that he will in turn be able to help and encourage others in his community. 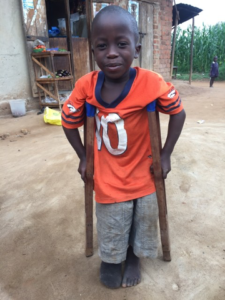