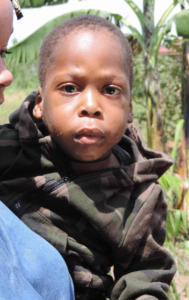 Hannington was born in 2015 to a 14 year old mum.  As he grew, it became apparent that he was not developing the way he should.  Hannington had poor muscle control and his legs appeared to be weak and stiff.  For a young and inexperienced mum – and a family living in poverty – this was very hard.

When we met Hannington and his grandma in 2016, the family had no expectations of their little boy and did not know how to help him.  Ehud, who works with disabled children at the Loyne school in Lancaster, brought some simple items such as a small chair and a potty to show grandma how to help Hannington develop stronger muscles and how to toilet train him.  During the home visit with Ehud, we could see hope begin to shine in Grandma’s eyes as she realised that there are things that Hannington can and will be able to do.

We have often visited Hannington at home – usually in the care of Granma or a female relative.  On one of these visits, the house was in the beautiful countryside of Ssanga and outside the house door there was a tree full of golden weaver bird nests.  Hannington, although shy, had a small playmate in that house who made him smile.

Rising Above Disability or Katalemwa Cheshire Home was founded in Uganda in 1970 and officially opened in 1971.  The aim of KCH was to provide a family home environment to people who were incurable sick or with physical disabilities.  This was significant, as at the time, institutional rehabilitation was the only option for people with disabilities.

Unfortunately, Katalemwa suffered considerable setback during Idi Amin’s regime and outside support was very limited.  However, the Leonard Cheshire Foundation in the UK continued to send messages of hope and support.

In 1988, Captain Leonard Cheshire came in person to Kampala to make a plan for reconstructing the home following the 20 difficult years that had left it in ruins.  With the assistance and support of several groups including the Sisters of the Good Samaritan, the home began to function once again.

In 1994, Katalemwa Cheshire Home for Rehabilitation Services became a centre for children with disabilities, with the belief that short to medium-term rehabilitation for children provides the starting point for an empowered and fulfilled life.

A holistic approach to rehabilitation was introduced, bringing on board educational support and skills development for parents and children, with the belief that the rehabilitation of a child extends much further than medical care.

Thanks to KCH, Hannington now has a custom-made stand to help support him so that he can stand weight-bear.  Standing should help Hannington’s legs become stronger.

We have seen Hannington regularly in our clinics and he has particularly enjoyed wearing Ibra’s headphones and listening to music when there is a lot of background noise.

Hannington continues to thrive and to surprise his family who now have more hope for his future.  We have recently been sent a video of him speaking English to Pastor Robert which is a big leap forward in his development.  We hadn’t heard him speak to us in before – not even in Lugandan!

With the continued help of KCH, sponsorship and financial support we hope and pray that Hannington will grow into a young man who has an education, hope for the future and opportunities to contribute to his community.

I am sure that Hannington has many more surprises to spring on us in the years to come and look forward to seeing what may transpire!