At our last clinic in Nakaseke we met a tiny baby, Sarah who was 3 months old and yet weighed only 1.3kg. She was dying of malnutrition, raised temperature and dehydration and was transported to Kiwoko Hospital at great speed by ace driver Ibra, who managed a 45 minute journey in 25 minutes on dirt roads. The hospital said that they had not seen such a malnourished baby for some time. Sarah survived and is now home but attending a follow up clinic in Kiwoko. There has been particular concern about Sarah’s eyesight as she has been vitamin A deficient but she does appear to have at least some vision and we will have to discover more as she grows 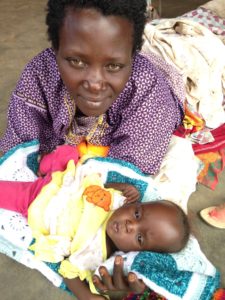 Some team members investigated the cause of Sarah’s condition and discovered that her mother, Mariam, is a paraplegic able only to move the upper parts of her arms, head and neck. Mariam had only been able to feed her baby for 2 days and the family had nothing- just a rented shack with a few rags, Mariam’s bible and a CT scan showing her broken neck. (She fell in 2011 when pregnant and lost that child but has gone on to have 2 more.)

On the day that we met the family, Ronald (Sarah’s father) had set out from home that morning carrying baby Sarah, desperate for help despite the fact the family had no money to pay for either transport to a hospital or treatment once there. He had not heard her cry for days and knew that she was very ill. Miraculously, Ronald met a man on a motorcycle who told him to bring Sarah to “the white men”. He found us and Sarah’s life was saved.

Members of the team went back to Mariam’s house, washed and clothed her, clothed the children and gave them food including bottles and baby formula. Pastor Sam bought them mattresses to sleep on and we also found blankets.

Pastor Sam and all the team were very moved by the desperate need in which we found the family. They were about to be evicted from where they were living and things seemed hopeless for them. With the family’s permission Sarah Clarke-Melling and Peter Gregson wrote blogs about what we’d seen and our generous supporters began to pledge money to help.

Just 8 days later, Pastor Sam had facilitated the buying of a piece of land and Mariam and Ronald’s house-build began! The two oldest boys Benjamin and Ronald junior have started at pastor Sam’s school and baby Sarah is growing stronger. They moved in on Saturday 17th March!

Thank you to everyone who has supported this family. Their lives have been completely transformed by your generosity.